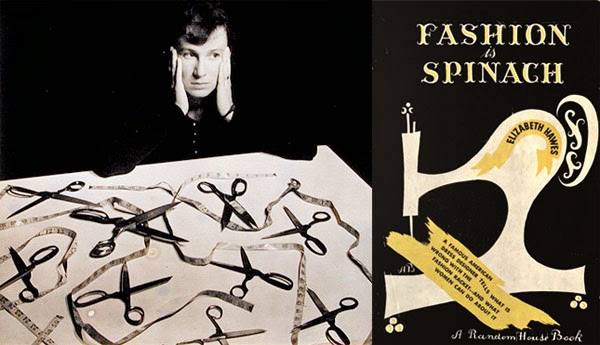 If you’ve not yet read the long-overdue piece on Elizabeth Hawes and her first book (and my blog namesake), “Fashion is Spinach,” you must you must you must. (Click here.) It’s titled “The Most Brilliant American Fashion Designer” — and we’re a little bit proud and very happy that Miss Hawes is finally getting her due. It made me reflect on my own history with the book (and this blog), which I’ve written about below. Enjoy.

Sometime on October 16, 2005, I came across a brief reference to “Fashion in Spinach” and pioneering American designer Elizabeth Hawes in one of the umpteenth fashion/lifestyle magazines I devotedly consumed (and still do) every month. It was a sly, insider-y reference — clearly a wink-wink nudge-nudge to the small cadre of readers who truly loved fashion enough to know the reference, and while the exact source escapes me, I know it was October 16, 2005, because within minutes I had gone online and purchased the domain name, which I still own and to which proved to help be responsible for my own sense of style, many recognitions and my current career.

I had no idea what Fashion is Spinach meant or what Hawes’ views were on fashion back in late 2005 — it would be another few months after I bought the URL to finally buy an old, rare copy of the book, I think on eBay, for the relatively “bargain” price of about $50 — but I instantly loved the quirky irreverence of the name. I had been toying with the idea of launching a fashion blog for months, but — even through there were, compared to today, only a small number of them — every “fashiony” URL I’d tried to obtain already been snatched up, though mainly by “squatters,” who had quickly figured out that grabbing hundreds of domain names on the cheap could eventually pay off big-time if someone was willing to pay them for even just one of those .com names.

I myself had been blogging since 2000 on a platform called Pitas.com, which had launched in July 1999, one month before Blogger.com. (Unlike Blogger, it was not the beneficiary of a big, newsworthy acquisition by Google in 2003 for a still-undisclosed sum, though it’s rumored to have been around a cool $1M. Which was probably insanely amazing back then, but a good indication of how far we’ve come in only a decade.) Back then, many of us “bloggers” were seen more as web-obsessed weirdos than “visionary early adopters” or anything remotely positive. I mainly posted little tidbits about concerts I’d seen or or things I’d purchased and, eventually, photos I took with the Brand New, State-of-the-Art 2-megapixel Canon digital camera that I splurged on in late 2002.

(In one now-hilarious incident, my blog got me called onto the carpet in Glenda Bailey’s office at Harper’s Bazaar, where I’d joined as a junior editor in fall 2001 shortly after she took over as EIC. Some back-stabbing colleague had found out I had a blog — bring my readership to a whopping total of five, no doubt — and promptly tattled to senior management, prompting the petrifying news that “Glenda had asked to see me.” My intense fear quickly turned to awkwardness when it became clear that while the magazine’s senior leaders wanted to make sure this “blog” thing wasn’t potentially problematic for the mag, none of them actually really knew what a blog WAS. Glenda, always incredibly kind, merely issued a gentle caution — nothing like the reprimand, or worse, I’d walked in expecting. Likely the fact that I was bawling my eyes out softened any potential scolding.

Rather coincidentally, one of the interns who worked under me at the time, Nadine Haobsh, gained instant fame — and a very nice book deal — a few years later in mid-2005, when she was outed for penning an anonymous blog about being a NYC beauty editor and promptly fired. The insta-fame that followed or Nadine could’ve been for me! Except that in 2001, no one would have even known or cared. Except, of course, my five loyal readers. Hi, mom!)

But I digress. I launched FashionisSpinach.com — with full attribution to Hawes — in March 2006, and for several years, was devoted to it furiously. I was picked for some of the earliest fashion brand/blog integrations — brands like Chanel and Gucci sticking a stiletto-shod toe into the blogger waters — and eventually parlayed that experience into a new career in social media consulting, which I still do today. Ironically, that skyrocketing new career meant I no longer had ample time to spend on the blog, and while it’s still there, it’s been severely neglected for a long time. Unlike many of my early blogging peers, I can’t bring myself to officially retire it.

There’s still a tiny flicker of hope that one day, I’ll regain both the time and the energy to resurrect it.
I reread Fashion is Spinach every couple of years — along with a few of Hawes’ other terrific books — and I’m always struck by the timelessness of her words and wisdom. She had the (still) rare vision to see that being truly fashionable was not about being the first to wear the latest trends, or blowing huge amounts of money to fill a standard McMansion walk-in closet with designer labels.

Instead, she counseled her clients to hone their personal style, find styles and silhouettes that worked for their bodies and their lifestyle and — goshdammit — wear navy blue if they wanted to wear navy blue, even if the almighty Parisian designers/demi-gods had declared the hue to be utterly, hopelessly out of style that season. (Because, for no particular reason, it had been determined that red was the only color stylish people should even think about wearing that season. Ohmygosh, you still like navy? Sacre bleu! A total fashion non.)

For decades after Hawes’ day, her fresh perspectives on personal style were all but ignored. Typical American shoppers followed the proverbial style crowd like sheep; growing up in Delaware, I knew from a young age that you were nobody unless you had a little polo player embroidered onto your shirt or a pair of jeans from the Gap.

But now, the democratization of fashion — sparked, in large part, by a long list of blogs (including a little help from even from Fashionisspinach.com) — has elevated and celebrated creativity over conformity. Anything goes these days–just wear it with confidence. Now, 76 years after the debut of “Fashion is Spinach,” it may finally be time for a follow-up with a more positive point of view. How do you feel about “Fashion is Chocolate Cake?”