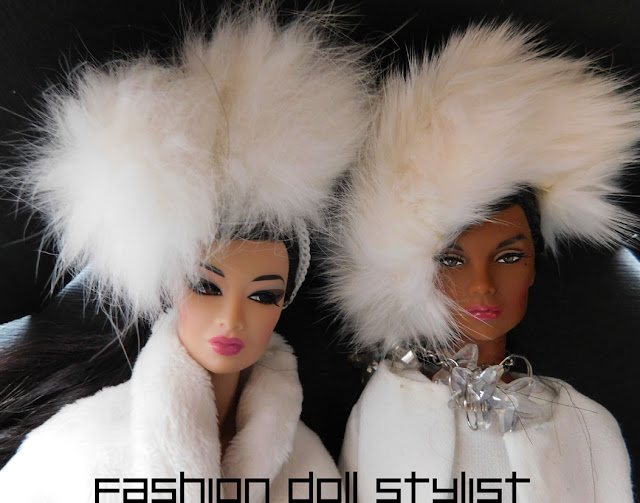 Given everything happening in the world right now, it is difficult to talk about something as frivolous as clothes. But even though it seems a bit inappropriate to think about mademoiselle’s next fashion fix, all of us in this Lilliputian world of dressed-up divas know that the best distraction is doll play. So for just a few moments, me and my girls would like to transport you to fantasy land where everything is set back to normal, and we are allowed to go outside in style! 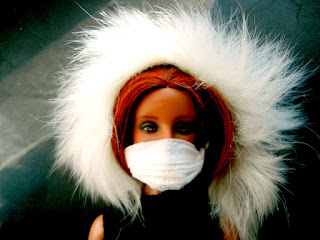 Fashion is a reflection of the world around us and as such, the things we see on the catwalks continues along its chaotic path. There are lots of “sensible” everyday frocks for us “normal” people,  as well as outrageous costumes for pop star red carpet. However, there are glimmers of hope. Much of the “grab bag” bloopers on the catwalk aren’t selling well so a trend is emerging that favors a return to the good old days of wearable chic. In New York, my girls braved the subways (with hand sanitizer and masks in hand) to see what they could find for Autumn/Winter 2020. Let’s start with the cloakroom. 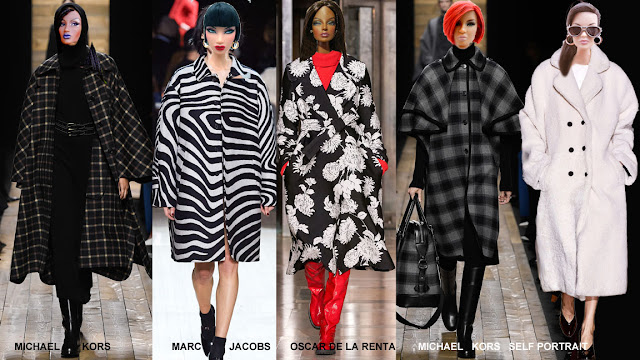 Living large, overcoats are cut with lots of ample volume. Look for coats with rounder shoulders, in animal prints or florals as well as traditional windowpane plaids and fleece.
. 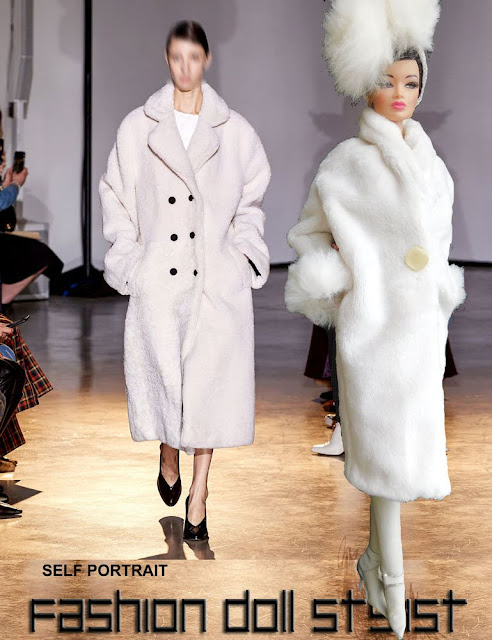 Liu saw so many possibilities with this coat by Self Portrait. For her version, I used a fluffy white fleece, which on her, resembles a sheared lamb. I used a pattern for the double breasted coat, but felt the little black buttons didn’t do much for the overall look. Instead, I opted for a 1950’s touch. Instead of three sets of black button doubles, I used one large “statement” button. For the cuffs I added a bit of white faux fur. And though I love winter white, it’s not the only color when it comes to fur… 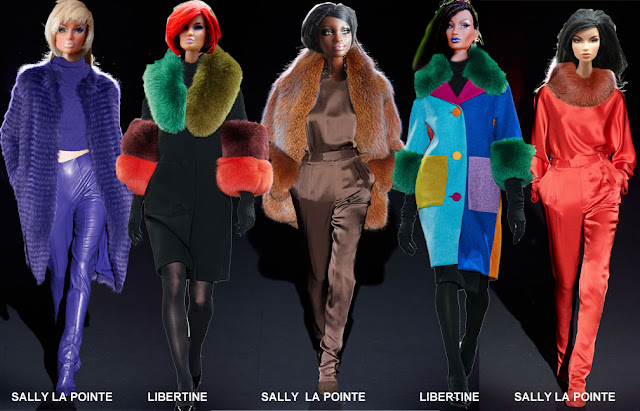 These looks are as fun and furry as they are colorful! My ladies love the total look where the sweater, leather pants and furry coat all match. But they also love the idea of using different colors of furry accents in the same color. 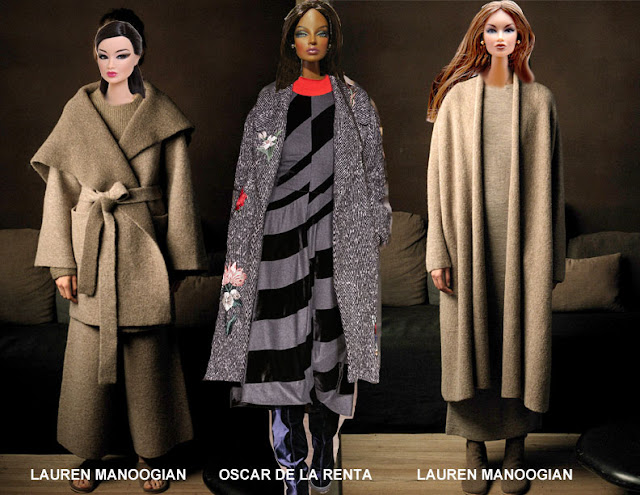 Some designers believe it’s going to be a long, cold winter ahead. Hemlines dip to the ankles. The body is totally draped in soft wools and moletant jerseys. From the karate suit to the super-sized jersey ensemble, these are long, easy looks to keep dolly warm! 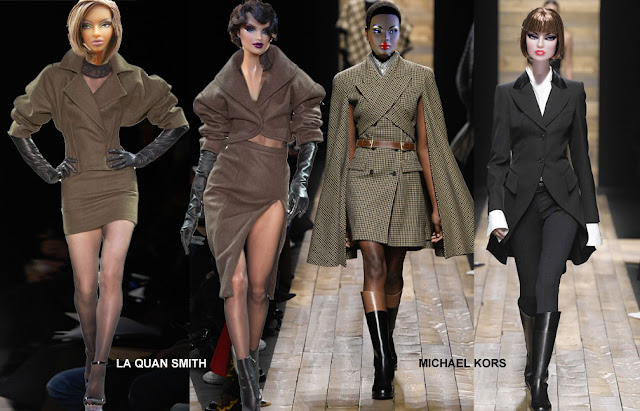 Trends take on a serious air with the return of the tailored suit. The end result doesn’t have to stay regulated within the sharp classic lane. We were  intrigued by designer, La Quan Smith’s flirt with the 1980’s super inflated shoulders.We also liked how those two suits were accessorized with long leather gloves! 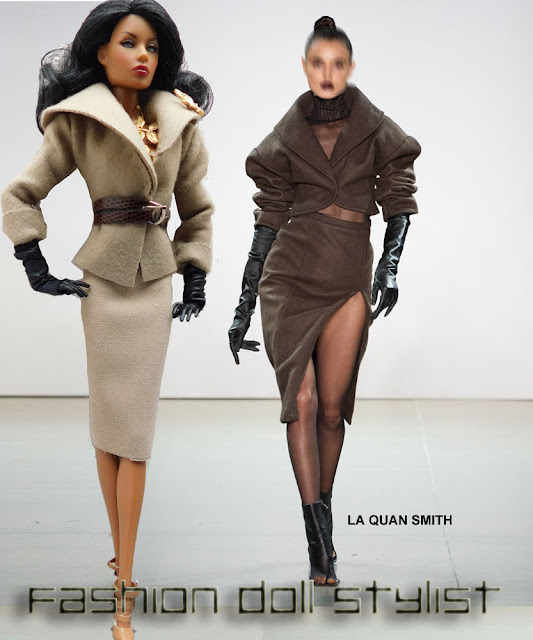 For Denise, we decided to “clean up” the shoulders a little bit. In the original outfit, those super inflated shoulders falling off the shoulders reminded me too much of the last days of that trend when things went from chic to ugly. So I began with a jacket pattern with set in broad, square shoulders, and used a coating fabric which resulted in a more structured silhouette. I used a stretch fabric for her pencil skirt in a matching tone. This is a winter collection and I don’t feel the need for a deep slit in the front. The sleekness of her form fitting skirt is sexy as is! 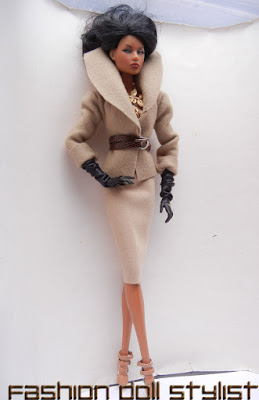 The collar can be raised up for a dramatic effect! 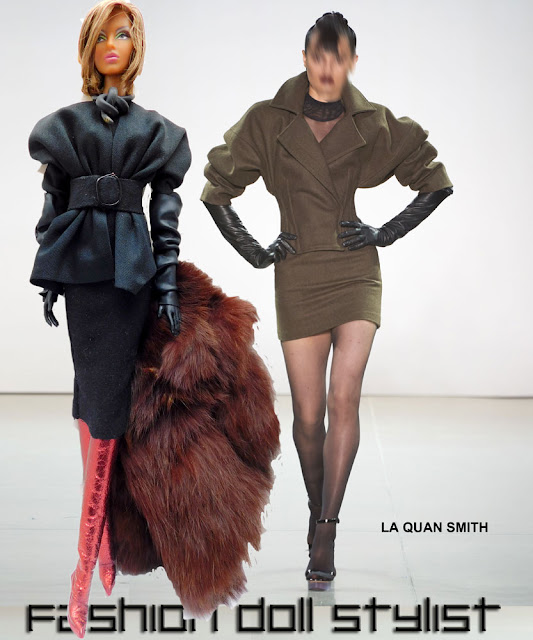 The easiest way to get this look is by using a pattern with a dolman or batwing sleeve. Click HERE for my pattern. Here, for Yvette’s version, I started out with a dolman sleeve top that I belted with a very wide belt. 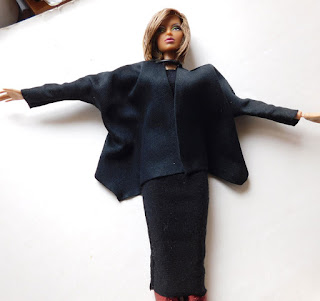 On the left, Yvette has her arms outstretched. This is a really easy pattern. To get the final look on the right, simply belt the waist, push up the sleeves and add on the gloves. Personally, I prefer a longer, just-under the knee, pencil skirt. To my eye it looks newer, more chic. 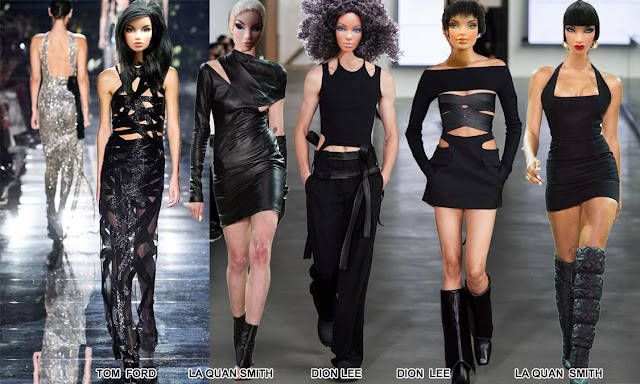 Take a walk on the wild side. This is a wink at New York’s East Village back in the 80s: sex, drugs and rock & roll. This was the stuff good party wear was made of particularly  back in the days of New York’s Studio 54 or Paris’ Le Palace. I still like the intricacy of the bondage wrap, the leather, the slashes of flesh, the juxtaposition of shiny leather and matte jersey. 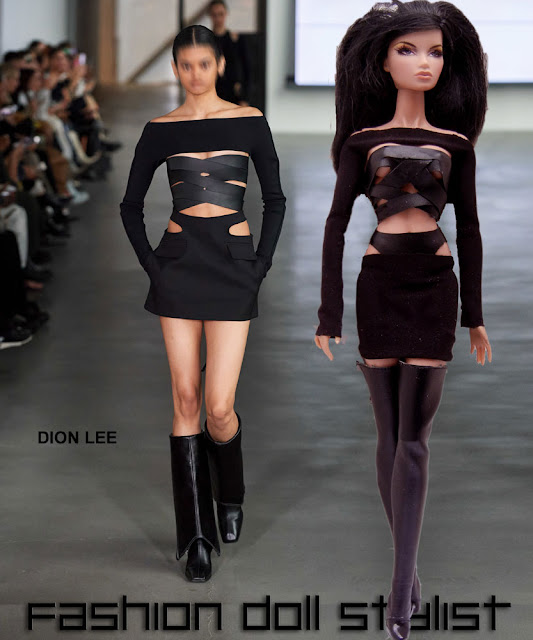 So to resolve the issue between the younger me and the older me…… I added a belt. But if Sam is anything like her human, and decides to steal away for some hot club action…. she will leave the house with the belt on…..and then after she gets to the party…..the belt will come off!!! 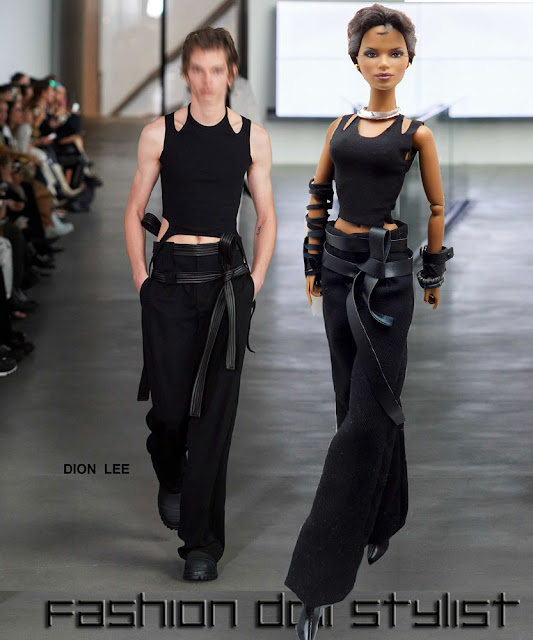 Daywear into partywear–there is this ninja warrior look: a black tee worn with wide, straight legged trousers which double belted. Actually it is one very long belt wrapped around the hips twice and looped. The top is a simple basic bodice (in rayon jersey) where the area over the shoulders have been split  to give the illusion of a layered tee.. 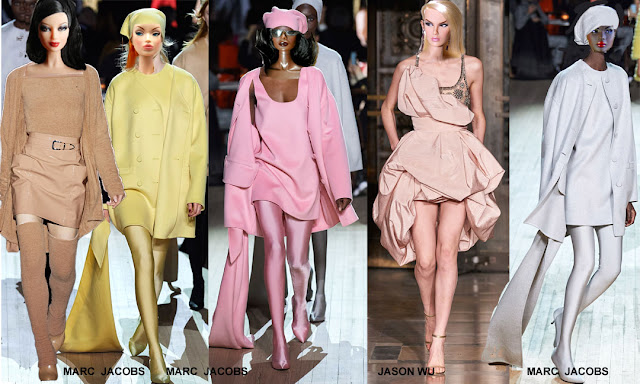 The real story here is the “total look” in terms of color. I’m really not so sure about this choice of colors, however. I do like the light, frothy pastels, the monochromatic themes, the matching legwear, the ease of such simple silhouettes. But, other than the Jason Wu cocktail dress, the clothes are really nothing special. 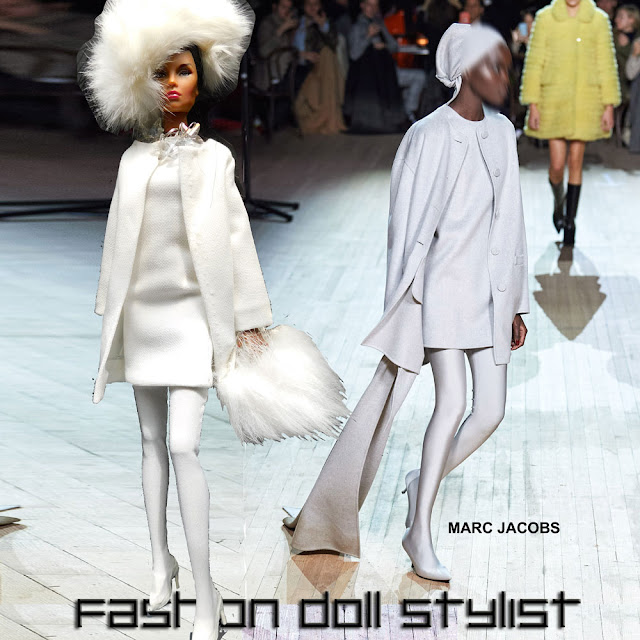 For Joan, I made a snowy white dress/coat ensemble with matching stocking boots. I didn’t notice it so much on the human, but for the the doll’s version, a basic sleeveless shift dress and a simple coat– I think it is…a bit boring. I added a furry hat and matching purse and though it’s quite nice….and quite elegant.. at the end of the day, it had me wishing the designers had made use of a rich autumn palette. 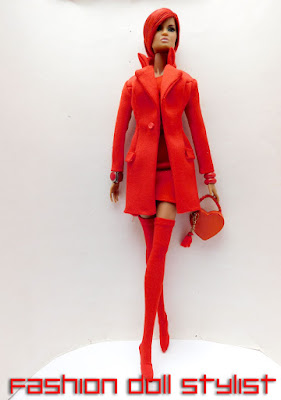 What I did here was to assemble a few of dolly’s existing wardrobe pieces of the same tone. And see…in flaming autumn red, the look really lives up to the beauty of an otherwise, colorful season. 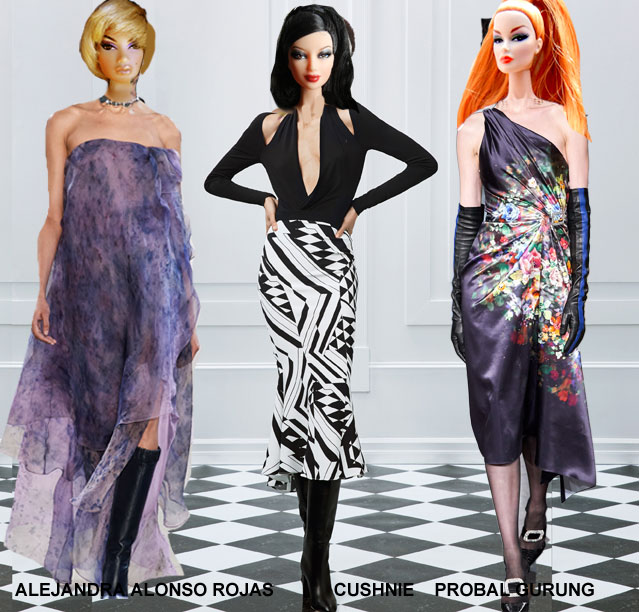 Geometrics, painter’s splashes of color, ripped organza cascading down from the shoulders, this is somewhat of an nontraditional approach to chic eveningwear. 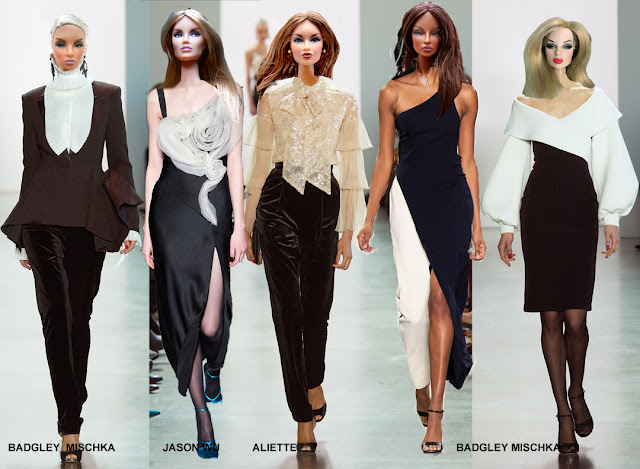 These are very pretty, understated looks. The black and white delivers a clean, crisp finish to an otherwise curvy, feminine look in each case. We particularly like the curvy jacket worn over velvet trousers, the organdy cabbage rose suspended over the shoulder of a silky satin slip dress, and the picture frame collar that crowns the full, bishop sleeve of a simple black dress. 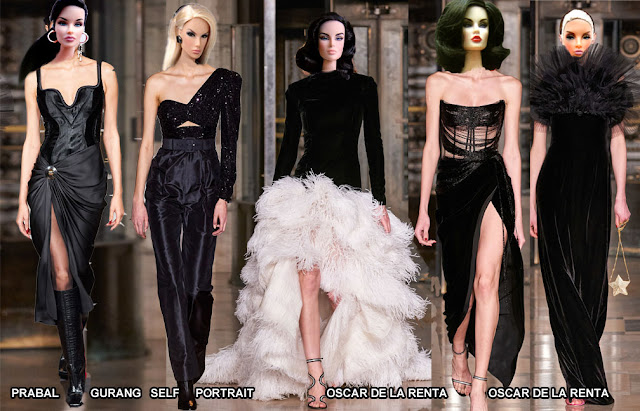 This is the big city edition of eveningwear. There are no costumes, no gimmicks, just real-time, understated glamour worn effortlessly. It’s the kind of sophistication that stand out in a crowd. 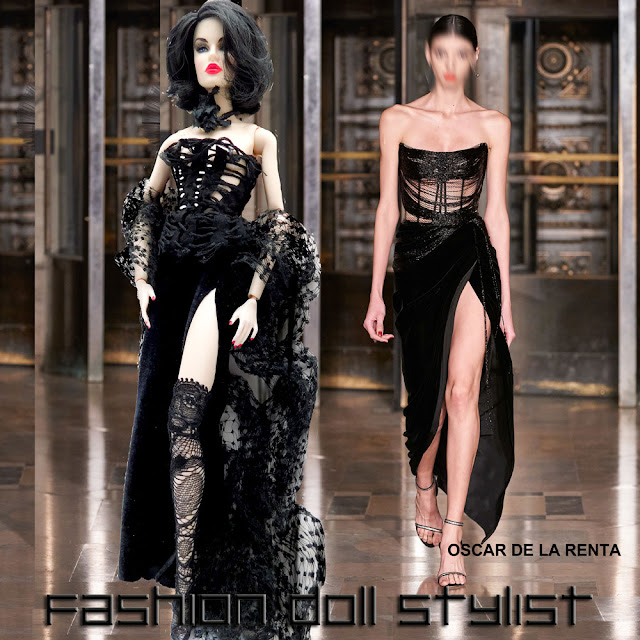 Noor immediately opted for the sultry look of a open-work corset worn over a velvet wrap skirt. For accessories we opted for a pair of lace stocking boots because they mimic the airiness of the corset. Over her shoulders…..netting. Tip Vintage shops often have this kind of netting once used by ladies to cover their heads in Catholic churches. They make wonderful shawls!! 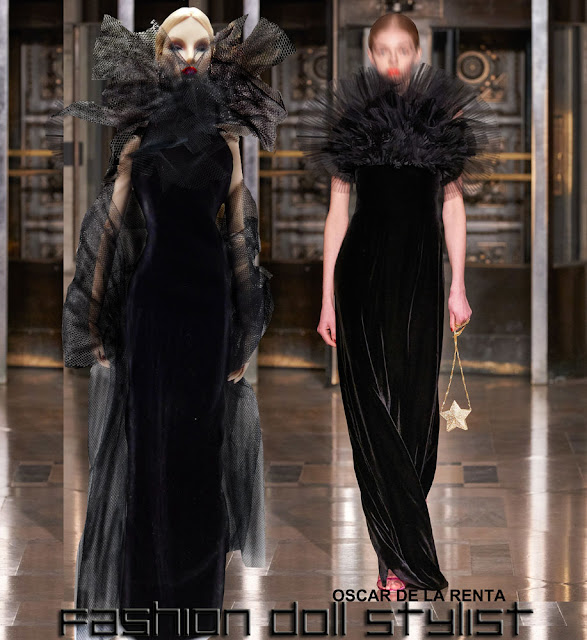 Katherina is a drama queen…She loved this velvet sheath dress with its ruffled tulle bib tacked onto the front. Instead of cutting the layers into a uniform length, we felt it was more interesting to leave the layers uneven. 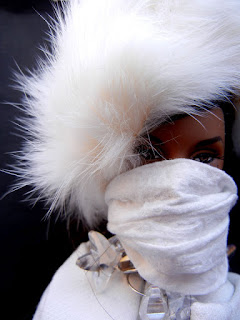 Hang on to those face masks. This train ride is not over. Next up.. a quick stop in London!